Skip to content
HomeWordless Wednesday(Page 3)
Somehow this group ended up on the altar of St. Edward Church in Youngstown. This photo was taken around 1988 or 1989. Left to right are me (Joe Lowry), my cousin Laura Lowry, her brother Michael, my sister Caroline, my cousin Chrissy Sofranko and cousin Michelle Dockry Churchman. While I look ready for a military review, the rest of the group are doing their best to stand still. What I wonder was the occasion?

Update 2/17/14: In talking to my Aunt Chris, we believe this event was either my sister Colleen’s baptism or a Mass in memory of grandma Lowry. The timeframe is nearly December 1988.

My maternal great grandparents Francis and Helen (Bixler) Witt all dressed up with hopefully somewhere to go! Great Grandpa sure looks dapper with that navy blue pocket square. The corsages lead me to believe this was for an anniversary party or perhaps a wedding. I’m certain someone knows; it’s just that I don’t. This photo was taken around 1980.
My grandfather Chuck Lowry (below the arrow) and his friend Ed Conricote accept food and cash donations on behalf of the Saint Vincent DePaul Society at Saint Edward Church, in which both were active. Also pictured is Kathleen Manning, the grandmother of a good friend of mine and a representative of the Confraternity of Christian Mothers. This picture appeared in a newspaper 30 years ago next week, January 13, 1984, but unfortunately I don’t know which. It is not The Vindicator, but could be the Catholic Exponent

The Witt brothers being weird. This photo was taken on Thanksgiving 2001 at the Sacred Heart Retreat and Renewal Center on Logan Avenue in Liberty Township. My grandmother worked there and so we often used its commercial kitchen and dining rooms for large family dinners.

Cowboy Chuck Lowry (the only cowboy in the West armed with a Thompson submachine gun) models the latest Christmas gift in front of the tree at the Lowry homestead. Perhaps Ralphie from “A Christmas Story” was created from this photo.

It’s wonderful to see the small houses around the tree in this photo. Those were under the my grandfather’s Christmas tree until he passed away in 2007. I believe they are with one of my aunts now.

I’ve featured a number of photos on the blog that include four generations of relatives. This photo was taken between 1949 and 1962. I can’t be more precise right now because I’m not certain who the baby is, although I imagine this is in the later years of that range based on the suspected age of the individuals in the photo. In addition to an unknown aunt or uncle, the photo includes my grandfather Chuck Lowry, great great grandfather George Pepperney, and great grandmother Margaret Pepperney Lowry. I will need to check the original and see if there is any information written on the back.

My great grandmother Caroline Porbusky Wolford loved to make quilts. She made this beauty as a gift to my grandparents Howard and Barb Witt. It was presented to them the night before my parents’ wedding. In this photo are, from left to right, my grandmother Barb Wolford Witt Viti, grandfather Howard Witt, uncle Tom Witt, great grandmother Wolford, my mom and (I think) two unknown relatives in the right foreground. 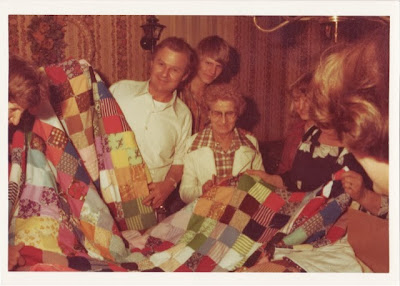 This is my great grandfather Francis John Witt. I have no idea where or why this photo was taken. Can anyone fill in the details?

Caption: In the Army. Ed.
Date: Late 1910’s
Location: Unknown, but probably Leetonia, Ohio
People: Edward Martin Lowry
Birth 8 Dec 1896 in Leetonia, Columbiana, Ohio, United States
Death 17 May 1978 in Canton, Stark, Ohio, United States
Ed Lowry was the brother of my great grandfather Charles Edward Lowry and therefore, my great great uncle. He served in the Army around the time of World War I, but I have not yet confirmed any overseas service.
Taken around 1925, this is four generations of Pepperney’s. On the left is my 3rd great grandfather Frank Pepperney, Sr. (1847 – 1927). On the right, my great great grandfather George P. Pepperney (1871 – 1962). Seated is my great grandmother Mary Margaret Pepperney Lowry (1902 – 1980); she is holding my grandfather, Charles J. Lowry (1924 – 2007).
Join 1,918 other subscribers