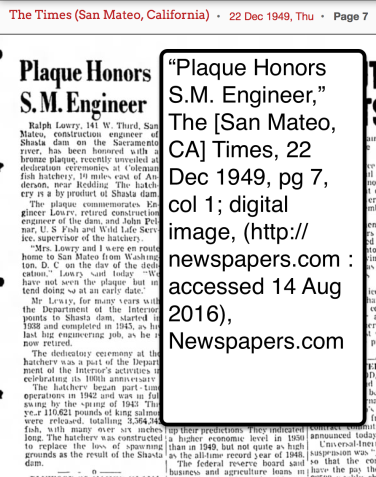 In my quest to document the life of Ralph Lowry, my first cousin, 3x removed and the U.S. Government’s chief engineer on many Western dam projects, I found this newspaper article posted above.

In part, it reads that in 1949, a plaque was placed at the Coleman National Fish Hatchery to recognize Ralph’s part in the creation of the fishery. Located about 35 miles from the Shasta Dam project that Ralph also built, the hatchery was created because the dam impacted the ability of the salmon to reach their natural spawning grounds.

Thanks to the power of the internet, I emailed Brett Galyean, the Acting Project Leader who runs the hatchery, to inquire about the plaque. He provided these two photos, showing the plaque next to the flag pole in front of the match hatchery building and a close-up.

My thanks to Brett for the extra effort. Another piece of Lowry history found!