I’m going to start a new and hopefully infrequent series called “Sloppy Genealogy.” While researching my 2nd great uncle Albert Joseph Groucutt (1905 – 1976), I came across his World War II draft registration on Fold3.com, a genealogy site focusing on military records. After saving the record, I went to Albert’s profile on my family tree database. Imagine my surprise when I saw this: 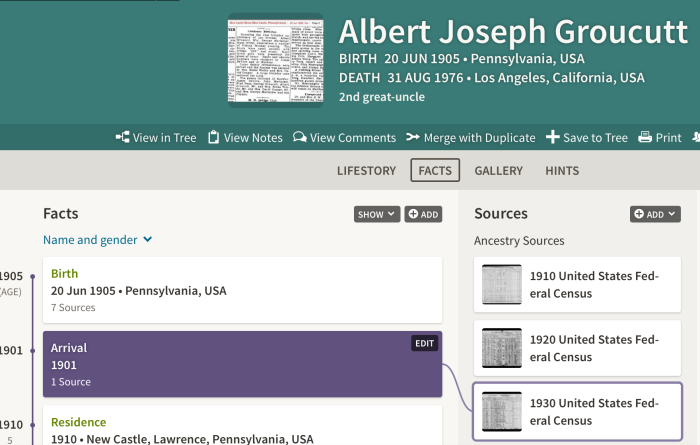 Sometime earlier, I can’t say when, I saved Albert’s 1930 U.S. Census record to his profile. When I did so, several facts were added to my tree, including his 1901 arrival to the United States.

So what went wrong? There were two failures that led to my profile for Albert indicating a 1901 arrival. The first is that the original image was improperly indexed by Ancestry.com. I’ve written in the past about not trusting the Ancestry.com indexing. The person who indexed this record simply copied the father’s arrival date to Albert, when he shouldn’t have one. After all, he was born in the United States thus there was no arrival.

The second error is my own. When I attached the 1930 census record, I would have been wise to review the data being added. Instead, I selected “accept” and moved on, most likely in a fury of record additions.

The moral of the story is to always double check the index and the information that is added to your tree. I deleted the improper arrival fact and attached the World War II draft registration form, as I originally intended.