Skip to content
HomeTreasure Chest Thursday – The Connection to Ireland
I’ve mentioned numerous times on the blog about the genealogy community reaching out to help one another. Some are willing to help with  headstone photos, research questions, or just offer helpful hints and tricks. Through the magic of Facebook, I received an offer to help find the obituary for my 3rd great grandfather Michael Lowry. Mike has been the subject of much of my recent research, in part because he is my connection to Ireland.
Those who know me know that I have have a deep love of the Emerald Island. I studied at University College Dublin in 2002 and my wife and I spent seven days in Ireland during our honeymoon in 2009. While I am probably more German than Ireland, ethnically speaking, Ireland has always had a deep hold on me. Michael serves as that familial connection to Ireland on the Lowry side of the family. He was born in 1830 and lived his teenage years in the worst of the Irish famine. He left Ireland in 1850 at a time when millions of Irish men, women and children boarded boats for America, Canada, Australia and numerous other countries. Many did not care where they landed, as long as it was away from the oppressive policies of Great Britain that kept Irish Catholics starving and in poverty.
Since I identified Michael about two years ago, I knew he was the connection to Ireland but was not certain in what County he was born. His long sought-after obituary was the answer. A random question to the Columbiana County Genealogy Facebook group and an exchange of messages with a local researcher led to letter in my mailbox a few weeks later with Michael’s obituary.
Of those details in the obituary, the most important was the location of County Westmeath as his probable place of birth. I say ‘probable’ for two reasons. First, the obituary was probably written with information provided by Michael Jr., who had never lived in or been to Ireland. Second, Michael Sr. lived in the United States for 78 years, which is an awfully long time for details to be forgotten, misremembered, or changed. Still, it’s the only location in Ireland I have and I will certainly use it as a starting block to help narrow further his place of birth. Perhaps I can determine the parish, townland or even the actual location of his home? More detailed research will be needed, including working with Irish records that are 164 years old. This sounds like a fun challenge to me!
OLD TIME RESIDENT DEAD
Michael Lowry Passes Away At Home of Son in Salem
Michael Lowry, Sr., 98 years of age, died at the home of his son, Michael Lowry Jr., 156 Roosevelt avenue, Salem, Wednesday evening at 9:30 of infirmities of old age. Mr. Lowry has made his home with his son for the past sixteen years.
Mr. Lowry was born, September 29, 1830 in County Weat’meath, Ireland. He came to American in 1850 and resided in Leetonia for many years prior to going to Salem.
Surviving are one son Michael Lowry, of Salem, and one daughter, Margaret Lanahan, of Ellwood City, Pa. Also 26 grandchildren, 20 great grandchildren and two great great grandchildren.
Funeral services will be held at St. Patrick’s Catholic church, Leetonia, Saturday morning. Internment at Calvary Cemetery. 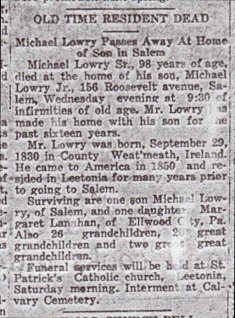