The Lowry’s of Youngstown are a large clan. My grandparents Chuck and Jean Lowry are responsible for eleven children, 15 grandchildren, and ten great grandchildren! Add to that number spouses, stepchildren, and pets, and there’s even more Lowry’s!

I’ve been working hard to fill some of these gaps and along the way discovered a deceased Lowry cousin that current Lowry’s have never met but we should all be aware of his contribution to America. He shall now be referred to as:

That Dam Lowry is Ralph Lowry. Ralph was born in Bevier, Missouri on April 18, 1889 to Edward and Sarah Lowry.

Edward, a coal miner, was in the process of making his way West while the rest of the family remained in Ohio and Pennsylvania. By 1900, Edward, Sarah, Ralph and his brother Edward Jr. were living in Ferry, Washington, which Ralph would call home through college. He attended the Washington State University, receiving a degree in 1917 in civil engineering.

In 1931, Ralph was appointed as a Field Engineer on the Hoover project. For the next five years he worked as one of a number of engineers before he was offered a promotion. Head engineer Walker Young was leaving the Hoover project and Ralph became the senior government engineer just as construction was wrapping up.

While the Hoover Dam is certainly the most well known of Ralph’s projects, he did not stop there. He served as an engineer on the Shasta Dam and Coulee Dam construction projects.

Ralph retired in 1949 as the Assistant Chief Engineer for the Bureau of Reclamation and settled in Monterey, California. He died on August 18, 1973 in nearby Carmel, California. Eileen and I vacationed there this past summer and I wouldn’t let her leave without a stop at Ralph’s grave. He and his wife Gladys are buried in the columbarium at El Carmelo Cemetery. 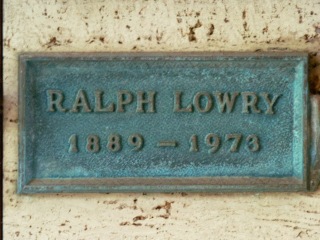