Skip to content
HomeFriday’s Faces of the Past – Grandpap, Pap, Charles and Jr. 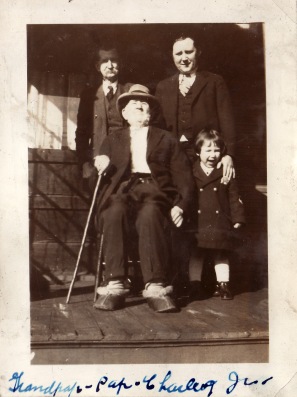 (family collection)
This photo has recently soared to the top of my list of favorite photos. Four generations of Lowry men in one shot, with a history that date back nearly 185 years.
The oldest Lowry, Michael ‘Grandpap’ is about 97 years old when this photo was taken on 12 February 1928. My dad tells me that he was blind and nearly deaf at this point. As he died in June 1928, he would not survive more than a few months after this photo. It’s incredible that a man who spent his life as a coal miner lived long enough to be the oldest in a photo of four generations. Check out his moccasins!
My 2nd great grandfather Michael ‘Pap’ was 59 years old. Michael and Bridget Conley Lowry’s youngest son was born in August 1868 in Huntington, Pennsylvania. He died in 1949 in Mayhew Nursing Home in Columbiana County.
My great grandfather Charles Edward Lowry was born in September 1899. He died in 1975. The little man with the double breasted peacoat is my grandfather Chuck. I never knew him as ‘Junior’ but it’s been great to see more than a few pictures with that caption. My great grandmother Margaret Pepperney Lowry was quite the photobug and was excellent at providing captions.
I have a lot of photos from the late 1920’s that I’ve scanned and will be publishing over the next few weeks, but this one is the cream of the crop.