Skip to content
HomeMilitary Monday – World War I Draft Registration of Carl Porubsky
In 1918 America was deeply involved in World War I and men were needed by the thousands to serve in the United States Army. The Selective Service Act of 1917 authorized the government to conscript men into service to fight overseas. On September 12, 1918, the pool was increased requiring all men 21-45 to register.
With wife Lizzie and daughter Caroline at home in Little Russia 33-year old Carl Porubsky, my great great grandfather, went to the local registration office and was registered for possible conscription into Uncle Sam’s Army. 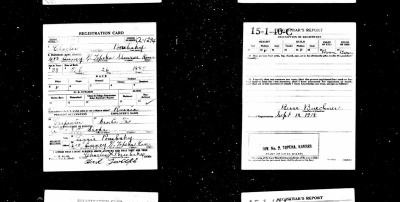 Interestingly, this draft card lists his name as Charles. I’m certain it’s for Carl. The date of birth, wife’s name, and address all align with other sources I have for Carl. Perhaps the woman transcribing it, Besse Buechner, heard ‘Charles’ in Carl’s heavy accent?