Mary Anna Bahle Pepperney is my great great grandmother on my father’s side. Born in 1877 in Allegheny, Pennsylvania, she was the daughter of Jacob Bahle and (Rachel Snauffer?)*.

Together Mary Anna and George would have at least six children, with four surviving into adulthood.

After their marriage, Mary Anna and George lived in Charleroi, Pennsylvania before relocating to Beaver Township, Mahoning County, Ohio. By 1930, they had settled in Leetonia, Ohio where George was a painter of rooms and houses, not canvas. (Interestingly, the 1940 Federal Census lists George as an ‘interior decorator’, which I suppose he was.) 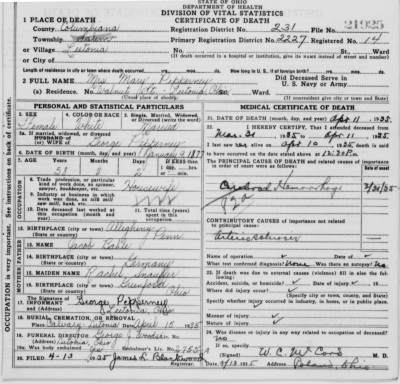 Mary was buried in Calvary Cemetery, Leetonia, Ohio.Her husband George would survive another 27 years before dying in 1962.

*Mary Pepperney’s death certificate provides this name, but so far I’ve found no other records of a Rachel Snauffer married to a Jacob Bahle. There is a contemporary Jacob Bahle in Pittsburgh married to Henrietta, but I haven’t explored that further..