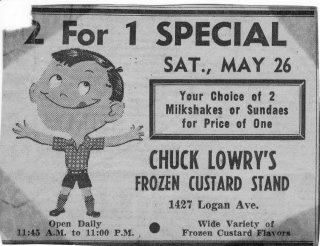 Lowry’s Frozen Custard owned and operated by my grandfather Charles James Lowry (1924 – 2007) and was a staple of Youngstown’ North Side for many years. After closing the Belmont Avenue location, Chuck relocated the business to 1427 Logan Avenue. It was closed in 1982 and the building torn down in the mid-2000’s after being vacant for many years. Over the years, Chuck also owned the Isaly Dairy store at the corner of Benita and Ohio Avenues, and in 1970, opened PizzaLane at the same location.

While grandma Lowry is offering, step right up for a buy-one, get-one milkshake or sundae! Mary Margaret Pepperney Lowry, Chuck’s mom, saying hello through the window of the original Lowry’s Frozen Custard on Belmont Avenue.