Was April 1 the first day my great uncle James Pepperney went off to work? Was it the first Sunday he worked? I’m not 100% sure the meaning of the caption, however April 1, 1923 was a Sunday. James was 16 years old, assuming this photo was taken on that date. I’m equally not as certain where he would have worked at age 16. If you have any insights, leave a comment!

Two little boys who lived just 50 miles apart. The same age and sadly, the same cause of death. These two death certificates tell of the very sad deaths of William A Pepperney and William Groucutt Jr.
William Groucutt and William Pepperney were born a few months apart. They were both no doubt the apple of their parents eyes. They were the first son in each family, expected to carry on the family name. Sadly, it was not meant to be. After a brief illness, both died from what is today a very manageable disease – pneumonia.
William A Pepperney was born on 26 December 1919 to Andrew and Magdalena Pepperney. He is my first cousin, three times removed. The Pepperneys lived, ironically, on Lowrie Street, in the Troy Hill neighborhood of Pittsburgh. Andrew was a pipe fitter and Lena kept the house. William was their second child, following a daughter Savilla three years prior.
At just 15 months, Andrew contracted pneumonia. It probably started as bronchitis or influenza however this was before antibiotics could have provided any relief. Antivirals and vaccines to treat or prevent the flu did not yet exist either. According to the death certificate, Wiliam Pepperney was attended to by Doctor J.F. Thomas from 29 March until his death on 31 March. He had probably been ill for days prior but it finally reached a severity where his parents felt the need to contact a doctor. At 2:30 p.m. in 31 March, 1921, little William died of complications from pneumonia. This no doubt was devastating to his family. He is buried in Most Holy Name Cemetery in Troy Hill.

Just 50 miles away in New Castle, Pennsylvania lived the Groucutts. William and Tillie Groucutt had two daughters before William Jr was born on 29 February 1919. William Jr is my first cousin, twice removed. William Sr. worked in the steel mills while Tillie was a homemaker. Tragically, William Groucutt would not live to see his first birthday. Sometime in late January he probably contracted influenza or bronchitis. By 2 February, his symptoms were so severe as to warrant a doctor’s attention and Doctor Davis was called. Sadly, on 3 February he too would die of pneumonia.

William was buried at Saint Mary’s Cemetery in New Castle on 5 February 1920. He was only 11 months old. 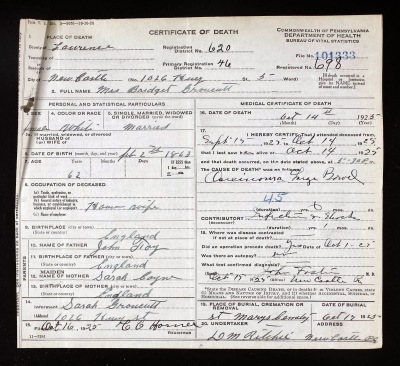 Sometimes you need to search long and hard for a great record, and sometimes you just need to click on a Shaky Leaf. Ancestry.com uses ‘shaky leaves’ to indicate that someone in your tree has a hint, or possible match to a record in their vast collection of databases. I had basically exhausted all of the hints in my direct ancestors so I was very excited to see a new shaky leaf appear on Bridget Foy Groucutt.

Bridget Foy Groucutt is my 2nd great grandmother and this shaky leaf hint indicated that a death certificate match may have been automatically made. Of course I review all of these hints meticulously. There are often useless record hints for a person you know isn’t your ancestor. On more than one occasion, Ancestry.com has suggested a possible match of a record for someone who lived or died 100 years from when the record was created.
This death certificate was a legitimate hint however. It told me quite a bit about Bridget and her life. At the end of her life, Bridget was at living at 1026 Huey Street in New Castle, Lawrence, PA with her husband George and daughter Sara, who was the informant on her death. She died of carcinoma of the large bowel after being sick for 6 months. An infection one month before her death and surgery just two weeks prior no doubt made for a difficult last stage of life for both her and her family.
Her death certificate tells us that she was born on 2 February 1862 in England, the daughter of John Foy and Sarah Coyne, likewise born in England. She was a house wife who tended to her home and large family. At the time of her death on 14 October 1925, she was 62 years old. She is buried in Saint Mary’s Cemetery in New Castle.

The three musketeers are my great grandfather Charles Lowry (center) and two others whose relation I’m not sure. Perhaps they are friends or coworkers. Based on captions in photos taken at the same time, the person on the left is named Bill and the person on the right Campbell. This photo was taken in 1929, which leads me to think it was probably taken at Republic Steel, where Charles was working at the time.

I have scanned so many photos that sometimes I glance over one that in fact reveals so much or at least is interesting as I try and discover my ancestors. Such is the case of this photo which is only the second unique picture I have showing my great great grandfather Michael Lowry and his father, also Michael Lowry. Based on their age in a newer photo I have of them from 1928, I would date this photo to the early 1920s. Many images in this collection are of the same time period.
The elder Michael was born in County Westmeath, Ireland in 1830. He emigrated to the United States around 1850 and worked most of his life as miner, first in central Pennsylvania and later in Leetonia, Ohio. I continue to search for leads to help me better understand his life. He left Ireland in 1850, at the height of the Irish potato famine. Crammed onto ‘coffin ships’, he probably crossed the Atlantic with a few hundred other souls, some infected with typhus and cholera. He died in 1928. His son Michael was born in 1868 in Huntingdon, Pennsylvania. He was also a miner. He died in 1949 in Leetonia after a nearly 12 year illness, probably caused by a stroke.
Source:
Michael Lowry, Sr. (1830 – 1928) and Michael Lowry, Jr., (1868-1949), photograph, taken in Columbiana County, Ohio; digital image, photocopy of original, scanned in 2013 by Joseph Lowry; privately held by Mary McCaffrey, [address for private use], Canton, Ohio; Two men wearing hats and sitting on chairs; Provenance is Charles Lowry to Mary McCaffrey, with prior to Charles unknown.

A photo of this woman was in a collection of Lowry and Pepperney family photos from the late 1910’s and early 1920’s but she was unidentified. Was she a nurse during World War I or in the years after? I don’t have any answers here but maybe you do. If so, please share in the comments. Thanks!
Edward Martin ‘Eddie’ Lowry, Sr. is the brother of my great grandfather Charles Edward Lowry. He was born in Leetonia, Ohio on 8 Dec 1896 and died in Canton, Ohio on 17 May 1978. He married and had three children. He looks quite dapper in this clearly professional portrait, with the flowing necktie, pocket square and lit cigarette. I believe this image was taken in the early 1920’s. This was in a small collection of Lowry family photos I received from Aunt Mary, who inherited it from my grandfather, Eddie’s nephew Chuck.
These are my great great aunts Katharine (left) and Eleanor (right) Pepperney. Katharine was born in 1910 and Eleanor in 1912. Based on their estimated age, I believe this photo was probably taken around 1922.

My great great grandmother Mary Anna Bahle Pepperney (1877 – 1935) holds a chicken near their barn in Leetonia, Ohio. This photo is part of an album with a number of images from the late 1920’s. As she’s wearing an apron, perhaps to prepare dinner or keep from getting dirty, one has to wonder how long the chicken was for this world.
Join 1,918 other subscribers